Often outnumbered but never outgunned, Imperial Knights are miracles of the Dark Age technology. They can annihilate entire regiments of the foe in a single salvo, or else wield industrial-scale close-combat weaponry that can tear down a fortress gate or flip a battle tank with a single blow. There are numerous patterns of Knight, each of which lend themselves to broad strategic roles, such as scouting or fire support.

The ground shakes as the Imperial Knights march into battle, the pennants and honour banners affixed to their armour flapping in the hot winds of war. Massive plasma reactors thrum with energy, driving the pistons, servos, and gears that send the Knight suits pounding forward with frightening speed. At the heart of each towering war engine is a Noble pilot, sitting in their Throne Mechanicum and controlling their mighty steed. 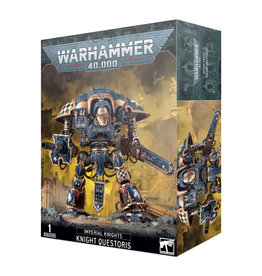